A Wolf in Gentlemen's Clothing

Well this book took me far too long to read. I blame school, but it was also a dense book.

My first real review in quite a long time is on "Wolf Hall" by Hilary Mantel. This 600 page book is not of the action packed variety, but if you like historical fiction, this is a good read for you. 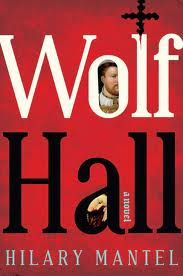 The story focuses around Thomas Cromwell, the lowly born son of an alcoholic blacksmith who rises to the top and becomes Henry VIII's right hand man. It took me a while to get into this book. Ms. Mantel often doesn't tell you who is speaking, and the different characters can get confusing to juggle, but she provides you with a list of players reminiscent of a playbill at the beginning of the novel. It's like she knows.

None of the characters became my hero of the book, even the center character, Thomas Cromwell, though I don't think he is exactly supposed to be. I would root for him to make it throughout the book and I didn't dislike him. He is a common man who is smarter and more cunning than the current advisers to the king and he proves himself, which is a great, classic story.

The way Mantel writes makes this story feel realistic. She sets aside the pomp and circumstance of court life and gets down to the real happenings, the behind the scenes policy making, back stabbing, and relationships. Cromwell is a man who came from the gutters and fought his way to the top, but he did it through business and tactics. This is a book about the day-to-day politics of Tudor England, while working for Henry VIII. It's about the things that are said between words and the silences that weigh more than monologues. It was subtle.

At the end of the novel, one quotation summarized what I felt most of the novel was about.
"The fate of people is made like this, two men in small rooms. Forget the coronations, the conclaves of cardinals, the pomp and processions. This is how the world changes: a counter pushed across a table, a pen stroke that alters the force of a phrase, a woman's sigh..."

This book is for the serious reader. I mean that as far as those who like serious reads, are alright with denser books that are more about talk than action. My suggestion is don't read this before bed. Not that this is a gruesome read or anything that will give you bad dreams, but it always made my mind wander.
Posted by Kristin at 2:39 PM No comments: