Dropping in on Jane Eyre: A Science Fiction book with a literary backbone

Set in an alternate reality during the 1980s, Thursday Next , is part of the government’s Literatec SpecOps team. You see in this version of England, literature is not just admired by a few, but fought over. Hordes of Baconists, those who believe Bacon wrote Shakespeare’s plays, act like Jehovah’s Witnesses knocking on people’s doors to promote their cause. Criminals attempt to reproduce original copies of works or forge never before released poems by Byron and Shelly on a daily basis. Baroque-ists, Reformists, and Renaissance-ians fight against modernists. Thursday is part of the unit protecting literature and keeping counterfeits off the street. 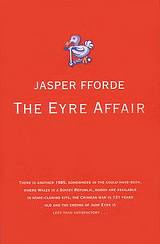 A mass murderer, thief and most wanted criminal with unknown powers, Acheron Hades, decides not only to steal original manuscripts of revered English literature, but also use a newly invented Prose Portal to travel into the books, steal characters and change the narratives forever. Thursday is recruited by a higher level team to help catch him because she’s the only person who knows what he looks like. Way leads to way, and Thursday ends up chasing Acheron across England and Wales, through time, and into novels.

The Eyre Affair by Jasper Fforde is a crossover novel; it spans genes, as a lot of novels tend to do. This one is very intriguing to me, however. At my library, it is in the mystery section. The novel is a police procedural with a detective at its heart, but in my humble opinion, the Sci-Fi aspect trumps the mystery aspect. Without the science fiction aspects, this novel would not exist. Time travel, strange powers, and an alternate reality are essential to the life of this novel. You could take out Thursday being a detective, and the novel could still stand on its own two legs.

Being that I’m not much of a Sci-Fi kind of person, I did not stumble upon this title on my own. It was on the top of a Sci-Fi booklist (another one of the lists my coworkers and I competed over, I lost) and it was about Jane Eyre and literature. I was immediately intrigued. Let me tell you right off the bat that this is not for everyone. It’s not a beginner’s novel. One needs some prior knowledge and tastes to appreciate it.  First, you should at least tolerate science fiction. Second, you need to appreciate police procedurals. Lastly, you need to have an understanding of English literature. At the very least know a bit about Shakespeare and Jane Eyre. See?! It’s a bit demanding.

Personally I was a bit confused by some of the time travel aspects. Other than that I followed along and found it enjoyable. Thursday is a fun character. She’s tough, but personable. The master criminal, Hades, is decidedly evil, but very fun to watch in action. There’s action, a love interest, and intrigue outside of the main plot. Everything a good novel needs. I found myself reading this at a leisurely pace. It wasn’t my favorite mostly because of the sci-fi aspects, but I’m also not huge into police procedurals.

This is a novel I would suggest, but the crowd I’d give this to is a rather defined group (see list above). This is the first in The “ThursdayNext” series.
Posted by Kristin at 9:56 AM No comments:

Here's the Banned Books video I helped create for my library.

Email ThisBlogThis!Share to TwitterShare to FacebookShare to Pinterest
Labels: banned

As a high schooler, one is forced to read all sorts of books; textbooks, classics, assigned reading, and papers/articles galore. It gets tiring and you resent all these books, even if, like me, you adore reading. So when you grow up and you see an assigned reading book that you never had to read, a little light goes off in your brain: DO NOT READ. The book was probably boring or preachy. There’s a reason it was on a syllabus and it wasn’t because teachers thought kids would want to read it. 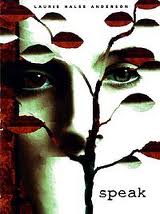 While having a small competition between myself and my coworkers on who read the most books off of several different reading lists (top banned books, top YA novels, etc.), I noticed that Speak by Laurie Halse Anderson was on a couple lists. Now I’m a secretly competitive person (I lose a lot, so I pretend that I don’t really care about competitions) and I was upset that I missed out on marking this book off while everyone else got it because it was assigned. It also sounded like an interesting book, so I decided to read it. A coworker lent me her copy and I dug in.

Imagine walking in to a high school cafeteria and having no one to sit with. Not only do you have no one to sit with, but your best friends hate you, and other high schoolers who don’t even know you hate you, all for the wrong reasons. If only they knew the truth. Melinda is not about to tell anyone the truth about that terrible night she was raped and no one is reaching out to her anyway, so she stays clamed up. While other ninth graders are making new friends, getting asked out, and figuring out the rest of their lives, Melinda is trying to keep herself together by disconnecting from her old life. She observes , hides, and keeps quiet. Her grades fall, her parents get mad at her, and yet none of it fazes her. She has greater demons to deal with.

Speak is a darkly humorous, poignant piece that addresses a horrific event through the eyes of the victim. Anderson creates a character who is real, scarred, eccentric, confused, hurt, and haunted. Melinda is not a melodramatic character. She deals with the rape as many people deal with tragic events they don’t know how to address; she holes up inside herself.

I’m a librarian, so my responsibility is to give the public the freedom to explore, seek their interests, do work, and gain access to the world of information and keep their pursuits private. Shutting down avenues for people to explore denies the public freedom of information and I’m against that. Do I think that certain materials don’t belong in the library? Sure. Porn has no place in a public setting. But I don’t believe that novels and information that some people disapprove of should be taken out to please those few. If we suddenly start denying entrance of materials because of challenges to them, where would the library be? Where would the public go to seek information? Religious books and writings would be banned because one religion disagrees with the other. All sorts of novels would be taken away, books about sexuality or even anatomy because they show nudity, biographies about controversial people, etc, etc. There is no end to the banning and challenging once you open that door.

I just ranted for a while there. So deep breath! All in all Speak was a great example of powerful young adult literature. I highly recommend it.

Now go practice your right to read! Happy Banned Books Week!
Posted by Kristin at 9:37 AM No comments:


Philippa Gregory is known for her historical fiction. Many people know about her because of “The Other Boleyn Girl” a book that became a movie, but she found her nitch in the historical fiction arena, with a focus on English monarchs, more accurately, the women behind the crown. 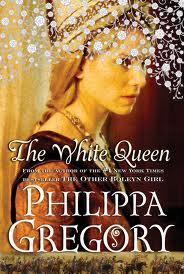 In The White Queen, Gregory explores the Plantagenet’s, an extended family of English royals and wanna be royals who fought for the crown for years on end, brother against brother and cousin against cousin. In these civil wars known as the War of the Roses, the Lancasters, the red rose, and the Yorks, the white rose, both claimed their family should inherit the throne. Thus begins a war for power.

The White Queen refers to Elizabeth Woodville, a widow who becomes the queen of England by marrying Edward of York. Elizabeth is a descendant of a water goddess, Melusina, and the story weaves this tale throughout it. The magic and Sight that Elizabeth and her mother have are a big part of who they are and their power. It makes for two very independent, for the time, intriguing women. At a time when being called a witch could easily get you killed, Elizabeth, the queen, was proud of her magical lineage and her mother was a proclaimed witch. These are some ballsy women! If you don’t know the myth/legend of Melusina, there are some interesting poems and stories about this mermaid-esque woman who gave up her magic and essence for a mortal man she fell in love with, and this story makes a beautiful juxtaposition with Elizabeth's story.

Elizabeth is a strong woman willing to fight for the man she loves, her family, and her children’s inheritance. Throughout the book you see her grow in ambition and courage, even while she loses and is shamed.

Plots, murder, and war are central to the story. The reader gets a sense of the unease and rockiness of the time period when family cannot be trusted and even in times of peace and harmony, someone is plotting to overthrow the king.

Gregory is a historian. She does her research and weaves as much of the “reality” of the situations in with her own style. Seeing as these events took place over 600 years ago, the records are a bit hazy and there isn’t much information. Gregory admits that she fictionalized a lot of it, but based many of the plots, overthrows, and speculations off of popular theory and what records indicate.

I dove into this book with gusto. The storytelling is beautifully done and engaging. Gregory writes healthy sized books (400 pages), which can be intimidating to me, but I enjoyed reading about the drama and plots. However, I found that around page 300, I started slacking a bit. The plotting, overthrow, and instability during this period becamet overwhelming. Why can’t we all just be friends!? The ending left the book open for sequels, and guess what, there are currently four books in what has come to be called, "The Cousins’ War" series. I look forward to reading the next book, The Red Queen, but think I’ll give myself some time in between.

If you are into historical fiction, you should certainly check out Philippa Gregory. She has made a name for herself with this genre and for good reason.
Posted by Kristin at 7:44 AM No comments: