Escape from Mr. Lemoncello’s Library by Chris Grabenstein is a fun new children’s book that has been on my reading list since its release. Not only is it about a library, but it also sounded like a fun mystery. Oh and on top of all that, it takes place in Ohio! 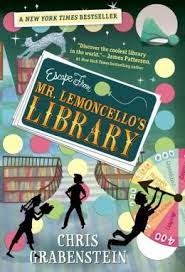 The town Kyle Keeley lives in has been without a library for twelve years. However, Mr. Lemoncello, a world famous eccentric game maker, provided the funds for a new library. This isn't a regular library, however. Mr. Lemoncello’s library has all sorts of tricks and treats up its sleeve. There are hologram statues, virtual librarians, game rooms, and shelves of books you have to use a conveyor to reach. For twelve lucky twelve year olds, they get the chance of a lifetime: to spend the night in the new library before anyone else. Kyle is picked as one of the lucky twelve and couldn't be more excited. He loves Mr. Lemoncello and has played his board games and video games all his life. So what could be more amazing than a night in the famous game maker’s library? Well what about a prize within a prize? When the lock in turns into a life sized game, Kyle and his friends must figure out how to escape from Mr. Lemoncello’s library in order to win a fabulous prize.

The best way I can describe this to you is as a mix between Willy Wonka and the Chocolate Factory and The Westing Game. Mr. Lemoncello is indeed an eccentric character much like Willy Wonka. He’s a lovable man and throughout the book he continues using classic and popular children’s book titles in his speech, which I just loved. The references to classic books, is a great way to make children aware of old favorites while they’re reading this book. The novel really felt like promotional material for libraries, which I don’t have a problem with, but the ending lines of the book were a bit cheesy. If I recall correctly it was basically, you already won your prize because now you have access to the library. Even I, a proud librarian, was rolling her eyes. The mysteries that the kids had to solve were tough, but the reader could also play along on some of them and try to solve the riddles. The characters, as in most children’s books were relatively two dimensional. There was the bratty girl and the rich kid along with the regular kids, like Kyle.

This book could be great. I think the premise is wonderful and the plot moves you along, but there is a large problem I see with this book; there’s too much reference to modern technology. There’s no better way to date yourself than putting in a bunch of technology that is sure to be out of style in a year’s time. The author could easily have left out these references and the book wouldn't have lost any of its value. I would still suggest you read this if you enjoy children’s literature, just do so within the next few years.

There’s a trend that has been en vogue for the last few years and I’m just going to say it, it’s really annoying. What is this trend, you ask yourself? It’s the objectification of women! Yay! Alright, that’s a bit melodramatic, but I’m tired of front covers with beautiful women in gowns.  Every YA, historical fiction, and inspirational fiction book aimed at women features some billowing skirt and a tasseled hairdo. I miss artistic covers instead of overly sexed women. Save it for romance covers.

Where did that come from?! Well, the book Shadow on the Crown by Patricia Bracewell features a blonde woman walking towards a gate. Typically, I’d avoid this kind of a book because of the reasons listed above, but it intrigued me (damn marketing). So my quest into 11th century England began! 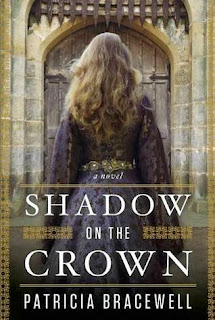 Emma is the daughter of the late Duke Richard of Normandy. She is an intelligent, lovely, moral young woman who must wait on her brother, the current Duke’s, leisure as to when and whom to marry. To Emma’s surprise, her brother makes a very fortuitous marriage arrangement between her and the widowed King of England, Ethelred. This marriage will bring Richard money and stature, and Ethelred a union with Normandy and the promise that the Normans will stop allowing Danish, Viking, ships to shelter their boats in Norman harbors. Emma is coroneted and becomes Queen of a land whose people she doesn't know and who mistrust her because of her foreign allegiances. The story unfolds as Emma discovers the hardships of a loveless marriage, gaining and losing power and influence, and caring for her people and her newly inherited lands. But the Danish threat always lingers.

Sometimes historical fiction delves too much into detail and I find myself pushing to get through a book. However, Shadow was a compelling novel. With what little detail there is about Queen Emma and this period in time, Bracewell created a stunning array of characters that catch the attention and a plot worth sinking your teeth into. The major characters all get first person time in the novel, so the reader gets some one on one time with Emma, Ethelred, the King’s son, and Emma’s rival. It can be messy to write in this fashion, but Bracewell made it enjoyable to get in the head of major characters, see their perspectives, motivations, and feelings. It makes it harder to hate the bad ones. Emma is the anchor of this novel. She is a compassionate, strong woman who knows what she must do and takes steps to gain power and influence in her new kingdom. This novel really struck home with how abhorrent the gender roles were in the 11th century. Women were truly looked at as baby makers and servants. They had to shut up and put up. Although her main role is to have a male heir, Emma wants to be influential. She wants to be a Queen worthy of her crown.

This is, I believe, the first book in what is to be a trilogy. The Anglo-Saxon Chronicle, a historical record of the Anglo-Saxon rule prior to the Norma Invasion, outlines some of Emma’s life, but almost nothing about Emma’s marriage to Ethelred is stated in the chronicle, so Bracewell could get creative. I truly enjoyed getting to know an era that has very little written about it in fiction. Although the novel could be dark because of the way people were treated, especially women, the warring, and the mores, it was a compelling read. Emma is an intriguing and admirable Queen, and I look forward to the remaining books in this series. If you are a historical fiction reader, I highly suggest you give this one a gander.
Posted by Kristin at 7:15 AM No comments:

A Zoo on the Ocean 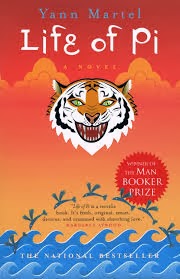 There are some books that were just meant to be movies.  Life of Pi by Yann Martel is one such novel. Now I read this book for a book club I run at the library, but prior to having read it, I watched the movie. I know! Shock and awe! Luckily, there was enough space between seeing the movie and reading the book that I didn't do the whole “well that was nothing like what I saw in the movie”. This is such a vibrant and visual book that it made a stunning and accurate movie.

Life of Pi is the extraordinary story of Pi. It begins with his childhood in India, where his father owns a zoo. Pi is an eccentric, wise, and vivacious young boy who takes a keen interest in religion. He is born Hindu, but picks up Islam and Christianity along the way, finding faith and comfort in all three. The real adventure starts when Pi and his family decide to sell the zoo and move to Canada. On the trip across the ocean, the ship sinks leaving Pi on a life boat with a chimp, hyena, zebra, and Bengali tiger. What follows is the story of Pi’s survival at sea with a wild tiger and how he carries on.

Many have found this book to be a survival story, a great book of storytelling, and a book about faith. I found it unique in that it combines all three. It has elements of a Biblical tale in the extraordinary circumstances that take place, yet even when Pi questions his beliefs, he remains faithful. Of course, the most obvious element of the story is that of survival on the Pacific Ocean with a wild animal. Pi’s ability to tame Richard Parker, the tiger, and find hope in his presence is the story that makes for good Hollywood filming. There were times during this second section that I skimmed through  because you can only read about fishing so much before it gets repetitive.

I enjoyed this story. I thought the framing of it was interesting with a young man relating his encounter with the older Pi as he tells his story. Most people can find something they like about this book, whether it be the adventure story, faith in the face of adversity, animals and nature, or a storyteller’s tale. If you've seen the movie, the book is quite similar, but I suppose I should say the book is always better…
Posted by Kristin at 1:34 PM No comments: