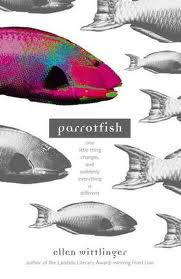 Angela is a boy living in a girl's body. She's transgendered and right in the middle of hir (hir is a combination of him and her) Junior year, she decides it's time to stop hiding who she really is and come out of the shadows. She has cut hir hair, bound hir breasts, and is going by the name Grady. This is a bold move for anyone, but for a high schooler, it is risky and causes all sorts of uproar.
Grady's family has its quirks, and hir mother and sister especially find it hard to accept Grady's change. The principle at school refuses to change hir name on transcripts because he believes she's just seeking attention and this will pass. Even hir best friend, Eve, abandons hir in hir time of need because she doesn't know how to deal with this change. Luckily, Grady becomes close with Sebastian, a rather geeky kid who doesn't seem to care what anyone else thinks. During this difficult period of adjustment, Sebastian becomes just the person Grady needs as a support and friend. Grady also develops a crush on Kita, a beautiful and extremely hip girl who is dating one of Grady's classmates. The whole novel isn't heavy, however. One of the most amusing parts of the novel is Grady's dad's love of Christmas and the lengths this family goes to to keep up their father's traditions of having a fully decorated (and gaudy) exterior, along with an interior that looks like something out of the Victorian era, on display for the neighborhood to view.

Through this story, we meet a strong willed person who knows hirself well enough to go against the grain in order to finally be happy with who she is, even if no one else understands. Although Grady doubts hir coming out at points because of other's reactions, she is also able to ask difficult questions and weighty subjects are discussed throughout the novel in an accessible and conversational manner. Sebastian and Grady bring up points about gender and if it is a stable characteristic that people should be judged on, if there is a gender scale where would people fall on it, and do people try too hard to act like the prototype of the gender they are labeled as? This is a well written story that is not too dramatic or heavy, but which deals with a subject that is not often addressed in young adult literature.


If you are interested in stories like this one or this issue I suggest reading Luna by Julie Anne Peters or Kate Bernstein's My Gender Workbook.
Posted by Kristin at 11:00 AM No comments:

The Absolutely True Diary of a Part-Time Indian

Wow. I finished this book and just thought how good it was. Humorous, heartbreaking, hopeful. You think you got it bad? Read about Junior's life and think again. 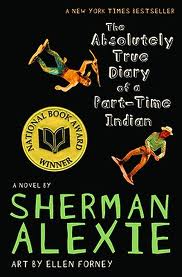 Junior is an Indian living on the reservation with his father, mother, loving grandma and sister. Although his family is a bit dysfunctional, his dad is an alcoholic, his sister hardly ever emerges from the basement, and he's a pretty strange kid himself, they love each other. Being an Indian on the reservation is a hard life. Booze hold sway over a lot of the people, and life is difficult and everyone is poor. Junior is a smart kid though and at the high school on the rez that he has just started freshman year at, he's not getting the education he wants. That's when he decides to transfer to the local town's high school that's twenty-two miles away. This decision throws all sorts of screws into his life. His best friend, Rowdy, who used to protect him against bigger guys on the rez now hates him, he's the only Indian at an all white racist school in the country, the rest of the tribe thinks he's a traitor, and getting to school is always an issue.

Just when things start looking up, Junior makes the basketball team and kids at his school are starting to notice him, all sorts of problems occur. Death is a part of Junior's life, but it hits way too close to home now.

Interspersed throughout the novel are cartoons that Junior drew. These add some life and humor to the story. Although a lot of this novel is dark, philosophical, and deals with heavy depressing issues, it maintains its humor and hopeful spirit the entire time. Junior is a kid that most can relate to and his story is inspirational and engaging.

Sherman Alexie won the National Book Award for this novel and he deserved it. I would recommend this to anyone 13+. There is profanity and some talk about the male anatomy...to put it lightly. Junior is a kid with courage and enough sense to make the best of terrible situations. We can all learn something from his attitude and this story.
Posted by Kristin at 10:52 AM 1 comment:

Isaac Asimov is a prevalent name in science-fiction. He was one of the first sci-fi writers who was actually respected and paid well for his craft, and today he is still a force in and outside of his genre. He deserves to be read because his ideas are at play today. 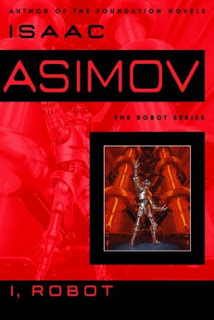 The three laws of robotics say that a robot cannot harm a human or through inaction cause a human harm, they must obey humans, and they must keep themselves out of harms way. "I, Robot" deals with these laws and the history of robotics through an episodic retelling by Susan Calvin to a reporter. Susan is the leading robopsychologist as US Robotics in the mid 21st century, but she is retiring. Through short stories the audience hears tell of robots from early on who could not speak to robots in the mid 21st century who run the economy. Each chapter is a new story of how a problem arouse with a robot and how the three laws can explain any flukes the robots may have. Each story is linked together with familiar characters and the fact that this is all connected back to Susan who is relaying this story. Because each story is about a robot who has gone wrong, or something weird that has happened, they are mini-mysteries or puzzles. Each error needs to be corrected, but first the scientists must figure out why and how the mistake happened. This is not all set in a lab, however, but some are on Earth, others are in space, or on other planets.

The book is not like the movie...at all. I think the movie is actually based off of the first novel in the robot series, "The Caves of Steel". Originally Asimov published each story in sci-fi magazines and then put them all together in the book with the connective tissue being Susan Calvin's memoir. They work as a whole, but you can tell they are meant as individual pieces. As I think is typically the case with a lot of sci-fi, characters come second to plot and ideas. The characters are dimensional, but they are not the focus of the novel. Instead it's really about robotics, and the speculative future.

Personally this book wasn't for me. I'm not a futuristic, technology, space person, and there is some technical language in here that my anti-science brain didn't like. It was not over zealous on tech language and it's nothing the average reader should be afraid of, but it just doesn't appeal to me. On top of that I thought the pace of each story was a bit more leisurely and longer than I would like, especially when I'm already turned off by the setting and plot line. I am not saying this was a bad novel. On the contrary it was good. Asimov is able to write well and he set up a nice world for more books about robot/human interaction and artificial intelligence. I will not be reading them though.

If you like sci-fi, or if you want to diversify yourself and step outside of your boundaries, you should try giving Asimov a read. If not this novel, try The Caves of Steel. It is a mystery and the pace is compelling, but it still holds the sci-fi elements that are important and it is a part of the "I, Robot" universe.
Posted by Kristin at 11:39 AM No comments: