So this guy walks into a publisher's office...

Yeah sounds like the beginning of a joke, I know. 1954, Harris Burdick walked into a publisher's office, handed him 14 illustrations paired with a title and caption and told the publisher "I have stories to accompany these. Are you interested in publishing them?" The publisher looked at the drawings and was astounded. They were all unrelated to one another and would be great stories. He agreed to see the stories Burdick would bring in the next day. The next day came and Burdick didn't show. He never showed and thus began the mystery of Harris Burdick.

No one knows what happened and if this was the man's real name, if he actually had stories, or if something tragic happened to him. What is left, however, are brilliantly inspiring images and captions for creative writers. Chris Van Allsburg put the images together in a book, so anyone may view them and might I suggest you do so...IMMEDIATELY! As a middle school girl, we were assigned to write a story about one of the images. They were all so thrilling and held so much potential. Since then I have loved the pictures. Who doesn't love a good mystery? All I wanted were the stories that accompanied them. Luckily, Van Allsburg put together 14 well known writers to write their versions of the stories in The Chronicles of Harris Burdick from Kate DiCamillo (The Tale of Despereaux) to Stephen King. 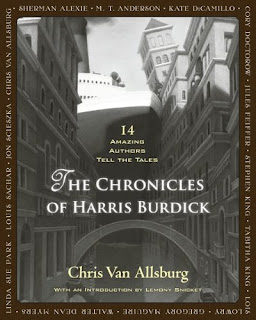 I must say that after years of waiting and forming story lines in my head, I was disappointed by many of the stories. They were not fantastical enough for my liking or I didn't think some of them really paired with the picture or caption. But isn't that what always happens when someone takes something you love and plays with it? From a more objective point of view, the stories were all different. Well written and always with some fantastical or sci-fi underlining. There is such a variety here, that it's hard not to find one story you liked. This is a great children's book, but remember that these are not the real stories...just another writers interpretations. The drawings are still a mystery and perhaps that's exactly what Burdick was going for. He wanted to inspire young writers (in age and at heart) to write! So do! Get absorbed in the images and the mystery and create your own adventures and inspire young ones around you to do the same. What a great way to get people using those creative juices.  Maybe you can do it better than the famous writers themselves.
Posted by Kristin at 10:05 AM No comments:

The Girl Who Circumnavigated Fairyland in a Ship of her Own Making by Catherynne Valente. Wow what a title!! Have fun tripping over that one. I love fairy stories and fantasies, so when I heard about this novel and saw the cover art, I knew I had to read it. 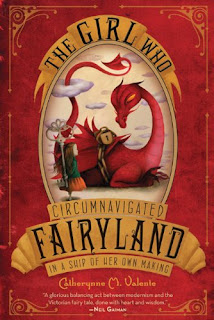 September is a young girl from Omaha who one day gets swept up by the Green Wind and the Leopard of Little Breezes and brought to Fairyland. Once there, she meets a variety of creatures and sets off on adventures to retrieve a spoon for Goodbye the witch. She meets her beloved Wyvern and together they make their way to Pandemonium, Fairyland's capital. September learns about the Marquess, the ruler of this land who has made all sorts of rules and brought bureaucracy to the land. In an instant, the girl September is supposed to detest, the Marquess, sends September on a quest to the Autumn lands to retrieve a sword. From here, September discovers more about the land and things living here. She loses and gains alliances and gets altogether wrapped up in the politics and happenings.

The writing reminded me a lot of Alice in Wonderland with language being played with and corrected and all sorts of things that are silly in our world being taken seriously in Fairyland. The adventure is much like The Wizard of Oz with a little girl getting caught up in the happenings of a world she knows nothing about and forming friendships along the way. But September is her own character. A well meaning girl trying to help those around her. I thought this was going to be a light and fluffy read. Although it's about Fairyland, there are some deep moments and the plot is not as happy and frolicsome as expected. Nothing in the story is dark or ominous, but there is a lot more going on under the surface than a sweet little fairy story. The main themes in this novel have to do with friendship and responsibility. Although September is young, she is a mature girl. She knows how to take care of herself and she knows what is right to do even when there's an easy way out.

As with Alice in Wonderland, I found myself getting a bit bored at times. There's a good amount of talking and wondering about what's happening, which can be a bit tiresome after a while. Things must be explained, but that is normal with world-building books. The first in the series must lay the land for the upcoming books. This is the first in a planned series of books.

I would put this in the young adult section. Although the name and subject matter speak to a juvenile audience, I think it would be difficult for a young crowd to understand all the talk and stay attentive to the story. Certainly a good read, but for those who are open to more descriptive writing. Fairyland will stick in my mind for a while, and I see myself picking up the next book in the series whenever it makes its way to shelves.
Posted by Kristin at 10:58 AM No comments: