Shivers down your back....

In order to get into the season I have decked out my apartment with pumpkins, a few Halloween decorations, and other fall favorites. But I needed to REALLY get into the halloween mindset, so a little Poe always does the trick (along with ghost shows and scary movies)! He may not be Wes Craven, but this is classic horror we're talking about people! He was the granddaddy of all the greats and he's just a creepy dead writer (anyone who was in love with a family member is kinda odd in my book). SO...I read 'The Cask of Amontillado', a short little number that isn't frightening until you start thinking about it. It's a tale of revenge, as are a lot of Poe's pieces, and somewhat of the psychological consequences thereof. The ending was a little creepy to actually picture, but it's tame in comparison to other Poe stories, so I still think I need to read some more. I would suggest giving it a read. It takes a matter of minutes to get through, so why not? I still need some more Poe frights! 'The Black Cat' creeped me out when I was a kid. It reminds me a bit of pet semetary with the dead cat coming back to life. Poe must have been one messed up guy to think of all this stuff, but they say there's a thin line between genius and insane. I think Poe may have slipped a little bit between them.

A little later.....
Ok so I just picked up my Poe book again to read 'The Pit and the Pendulum' and I needed to talk some more about him. I adore his style. He doesn't start his stories off by giving background or reminding you that this is a story, he dives right into his subject as if you're part of all the has preceded. I always start off a bit confused about what's going on, but then he works you in. In 'The pit...', he begins with the characters mental state and it feels like he's working out his current frame of mind and situation to himself. Poe effortlessly makes his audience a part of the current situation, which is the most frightening part of his tales. You feel the damp walls that the character feels, hear the raven's caw, and fear for the outcome of the situation. He's brilliant, and although sometimes dry at first and the language can be difficult, Poe is a master.
Posted by Kristin at 3:29 PM 1 comment: 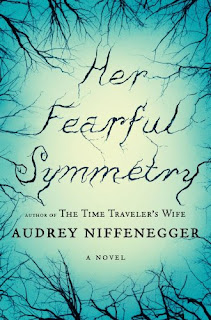 Alright, I just read the book Her Fearful Symmetry by Audrey Niffenegger. To summarize: A set of twins are given their aunts flat in London upon her death with the condition that they must live in it for a year before selling. It's about the extremly close relationship between the twins, the neighbors, the ghost of dead auntie, and the cemetary that borders the flat.
I thought it was an easy read and enjoyed it while I read it. Upon finishing the book I felt a little disappointed. I didn't feel I got anything out of the book. It ended somewhat abruptly and didn't feel like it fit with the rest of the book. Overall I wasn't impressed with it. This was by the same woman who wrote The Time Traveller's Wife, so I expected it to be good (even though I never read that book). There's no doubt that Audrey is a talented writer, but I wasn't a fan of most of the characters and, again, I thought the ending fell flat.
Just started If You Lived Here, I'd Know Your Name- Heather Lende. It's nonfiction about a woman and her family living in Haines, Alaska. According to the blurb about this book and what I've uncovered thus far it's about the town, land, and people. I like Alaska and people, so let's give it a shot!
Next on the docket: The Pysick Book of Deliverance Dane
Posted by Kristin at 12:48 PM No comments:

A Brief History of My Blog

Well I think this blog is rather self explanatory, but let me explain anyway. I have for as long as I've been able to read made reading lists. I have a drawer filled with scribbled out pages of books I want/wanted to read. Finally I digitized it!
But what is the use of reading all of these books and then forgetting them within a few years? I decided that I need someplace to talk about what I'm reading, ask questions, get suggestions, and hopefully other feedback.

I love reading and was an English major. I miss discussions, so instead of finishing a book and setting it aside, I decided to come the the world wide web. I want feedback!

So I will post the books I'm reading/read/want to read. I'll talk about what I think is interesting about my selections and hope that someone else comments and has some more literature to suggest.
Posted by Kristin at 12:30 PM 1 comment: