The Storyteller’s Daughter by Cameron Dokey is about Shahrazad, the legendary storyteller of a thousand tales that astounded a king and stayed his hand from murdering her. Although most of us are familiar with the stories, Aladdin, Ali Baba, Simbad, no one knows the story of the king and the woman who enchanted him with her wit and voice. Until now…

Here is the story of a King who was betrayed by the woman he loved and turned his heart to stone so he would never love again. In his anger, he declared that he would take a bride every night and kill her at dawn. What he did not anticipate was that a woman would present herself who would make him question himself and his convictions.

Shahrazad is a beautiful young woman who turned away from a world who did not accept her, but who possesses a rare gift that saves many lives. If she can save the king, she might also be able to find love herself.

Dokey’s story is written as if it were being told by a storyteller, that storyteller being a much older Shahrazad. This was a fun nuance in the book that I enjoyed. It is a very short read and that has value, but at the same time, I found it hard to believe that the couple would fall for each other so quickly. The Arabian Nights are 1001 tales and the book was barely 200 pages long! A bit more story would have been preferable given the depth and richness of the tales the storyteller relates. Given the length and the complexity of the original story, I think Dokey did a decent job with this novel even though it was short.

You will fly through this book, so be prepared with another. If you enjoy Dokey’s short novels and alternative takes on fairytales, try Beauty Sleep, a retelling of “The Sleeping Beauty”. Gail Carson Levine is also a wonderful author who writes fairy tale adaptions and fantasy books.
Posted by Kristin at 1:14 PM No comments:

Ernest Hemingway. That name stirs up thoughts of Key West, drinking, and misogynistic bastards. Oops did I just say that? Well anyone who knows anything about Hemingway probably knows he isn’t exactly kind or favorable to his two dimensional women.


Hemingway’s novel The Sun Also Rises is about hedonistic ex-pats living in Paris. Our main character is Jake, a newspaper writer. This was Hemingway’s first novel and as with the other novel I read, seems kind of useless. Things happen, but with emotions that linger beneath the surface and thoughts that are never spoken. Hemingway uses his words sparingly, and sometimes it makes the story seem pointless. 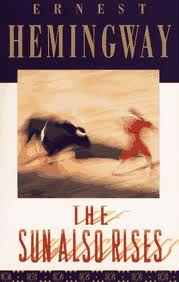 The characters are complicated. What they want, where they come from, why they are who they are is never explained. The reader is thrown into their lives and is taken through their current daily happenings. All the characters seem to do is drink and party. They travel all the time and have lovers, some sort of writing careers, and are almost unbelievable. The thing that saved them for me was all of their flaws. One of the men was not particularly popular with the group. Most of them had money troubles, yet continued to spend. They were all overly indulgent with liquor, but seemed to know how to enjoy a good wine and a fabulous meal.


Hemingway’s writing style is stark. He was not one to over explain or get overly detailed. This is what he is known for. He was a newspaper writer prior to being a novelist, and one can see the influence of that profession upon his novel writing. Get to the point and don’t be overly wordy about it, seems to be his motto. The events and things that Hemingway does emphasize are significant to him. These are the things that are important to life; appreciating a good wine, a sporting event, the sun and sand on a beach.
As for the recurring woman in this book, she’s not much to call home about. Brett is a heart breaker and someone who doesn’t seem to care who she hurts as long as she gets her way. She’s a bitch. Her relationship with the men in the novel is complicated. She has been intimate with at least two of these men and then goes on trips and meets other men, yet she is engaged. I did not understand how she functioned and why her behavior was so confusing. Why would her fiancé remain with her when she publicly goes off with other men? Why would she stay in the relationship when she is involved with other men and says she is in love with Jake and he with her? She isn’t realistic. The thing is she actually was based on a woman in Hemingway’s life. As much as I hear Hemingway is a misogynist, his novels always seem to focus around a woman. Maybe he doesn’t understand the female sex, but he sure does enjoy their presence and writing about them.


Jake is a good ole boy. He’s easy going and adventurous. He’s a man who seems to make friends easily and knows what he wants. Jake is always helping Brett out of her complicated situations, which was another one of my annoyances. Brett, for all her independence, was unable to function without a man at her side. Hemingway’s men are men. They have emotions and will be private with their sentiments, but are adventurous, drinkers, and love taking life by the throat. However, most of them, as stated before, don’t have themselves together.
This novel is known for the bullfighting. Jake and his friends travel to Pamplona for the annual fiesta and running of the bulls, an event that still occurs to this day and my father won’t let up on my sister about not seeing when she was in Spain. Anywho, this is where some characteristic violence enters the scene and Hemingway’s testosterone does a manly dance (I couldn't explain said dance to you, but I hope you know a man who dances and can base your manly dance on him). Description of the bull fights, the matadors, and violence on the scene, although not grotesque, are finally talked about towards the end of the novel. I suppose I expected a bit more emphasis on the bull fighting since I thought this was a novel about that subject.


Hemingway was one of his own characters or his characters were him. Whereas many authors’ novels are more enjoyable and adventurous than the author was themselves, Hemingway is known to be everything and more that he wrote about. He lived a full life of adventure, love affairs, violence, and in the end tragedy. Hemingway believed in writing the truth, so all of his novels are based on real life events or people.
If you enjoy the straight to the point style that Hemingway crafted, Joan Didion has a similar sparse style. If you’re looking for more of the man-man writing that is so fundamentally Hemingway, try The Red Badge of Courage by Stephen Crane. This is a novel about a soldier’s emotional and physical well-being during the American Civil War. Crane was also a journalist, but his style is more detailed than Hemingway.


Happy Reading!
Posted by Kristin at 1:37 PM No comments: