Just so you, my dear reader, knows, I originally wrote this post for my library's adult services reading blog. I cannot lie to you, but I also wanted this on here, mainly for my own purposes:)
Afghanistan and Pakistan are areas that are in the news...a lot. The Middle East has its problems, but what about its culture and traditions? In Jamil Ahmad's book, The Wandering Falcon, the reader gets a short glimpse into the Tribal areas of the border lands between Pakistan and Afghanistan. 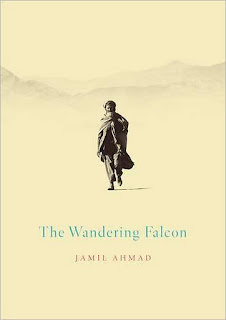 Through a weaving train of stories, the reader gets to know the culture of wandering tribal families and individuals. The story starts after WWII, by my calculations, with the birth of Tor Baz and the tragic story that accompanies his earliest years. From this point the story wanders along with different individuals who work for the government in these lands and people looking out for their family, themselves, and their tribes. It's about outcasts and people trying to make it through life in the mountains and plains, finding happiness in those around them or disappointment in the lot life hands them. Ahmad loosely ties these stories together through a "Where's Waldo" with the character Tor Baz. He shows up in almost every story playing minimal roles or just sticking his head in.
Ahmad is a storyteller. He knows how to introduce characters and situations without much back story and flag down the reader's interest. Although the names could be confusing, it was not hard to follow. The stories were short and to the point without much pomp and circumstance. Often these stories abruptly ended, but Ahmad made it work. As the reader, perhaps you never figured out the full story, but maybe you're never supposed to. The characters are surprising. In many stories, the women speak their minds and are unguarded. You meet people who are looking out for what's best, and some who are looking out for their best interests. I found myself surprised and amused unexpectedly throughout the book.
The physical book is a little thing, small enough to fit in your back pocket (not quite, but close) and about 250 pages in length. For those who enjoy literary short stories, want a look into tribal life in the Middle East, or are curious readers, give this book a read.
Posted by Kristin at 8:08 PM 1 comment:

Fairy tales, folktales, and legends are a bit of a cherished area of mine. I love how old, yet relevant and historical these tales are. They are magical and although I know most people scoff at them when they're adults, there is a TON of value in all of these stories. Stories like Cinderella and Aesop's fables were oral traditions, passed down from generation to generation. I've heard it said that language was the result of storytelling. People wanted to tell each other what they did that day or the *tall* tale of how they killed the largest mammoth in all the land, so language was born. Even though the stories may seem childish or grotesque in some cases, they are artifacts from past ages that still resonate throughout our culture with themes of love, greed, jealousy, and justice. Originally these tales were not collected for their appeal to children, but as an anthropological study of cultures. Maybe people don't understand the art of storytelling, but it's a lot more prevalent today than we think. Everyone has that friend or relative who is just captivating when they speak and they tell their stories in a way that makes you want to listen. That is a skill that is hard to come by, but that is what all of those ancient tales are about. One person mesmerizing an audience with a story. That is only part of what I ADORE about fairy/folk tales.

As part of a series of posts I will start, I will review fairy/folk tale adaptions.

One of my favorite folk/fairy tales is "East o' the Sun, West o' the Moon" from the Nordic lands. This is a story about an ordinary, yet determined, young woman who saves an enchanted prince from marrying a troll. Well another thing I love is fairytale adaptions and that is where East by Edith Pattou comes in. 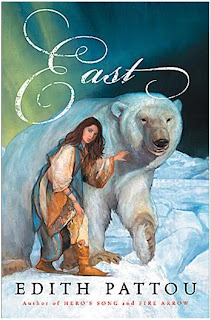 East is an adaption of this fairy tale. It is a young adult novel about 500 pages long. Rose is an adventurous young girl who is determined to explore the world. She gets her chance when a great talking white bear comes and promises to solve her family's problems if only she will come away with him. Away she goes to a castle in a mountain where she must stay with the white bear. This is no average bear, however, and at night, Rose has a companion who lays beside her, but whom she is unable to lay eyes on. Her curiosity gets the best of her and she finds a way of seeing the stranger's face one night only to discover that by so doing, she has broken the enchantment...for the worse. The white bear/man is swept away by the troll queen to a land east of the sun, west of the moon. Rose refuses to let her mistake stand, so she goes on a great journey, searching for the white bear.

One nice thing about fairy tales is that they are short. This can be an annoyance when you really want to learn the motivations behind people's actions, or more of the story. I enjoyed East for the most part, but thought it was a little long winded. Not knowing all the details leaves some magic and mystery in the story, but I felt that this rendition overdid it. The story is broken down into chapters written by a few characters, which gave the reader a good break to hear different sides of the story and different voices. All in all, it was a bit too lengthy and not as captivating as I was expecting.

I will continue reading folk/fairy tales and their adaptions because I want to hear what happened and know more of the story. Isn't that the sign of a good story, that you always want more? What stories stand out to you?
Posted by Kristin at 10:49 AM No comments:

A bleak beginning to the new year 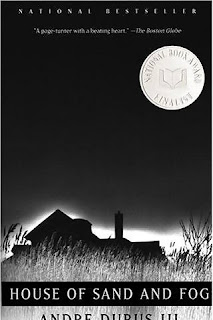 After deciding it is time to read some adult books, I chose one with a title and cover that I really liked. Not always the best idea, but Oprah reinforced this one, so you know it's good *sarcasm*. House of Sand and Fog by Andre Dubus III is a bleak read. Taken from the point of view of two people battling for ownership of a house, this is a book that forces you out of your comfort zone and into the middle man position.

Kathy's husband walked out on her and all she has left is the house her father left her brother that she now lives in in California. Colonel Behrani is an Iranian immigrant who fled with his family to America during the Islamic Revolution because he was in the old regime's military. He works hard to support his family, but has a plan to start flipping real estate. The new house he moves his family into, just happens to be Kathy's house that the county wrongfully took from her. As Kathy fights to stay off the streets and get her home back, the Colonel fights to make his family feel normal again and lead them into a better future. Things start taking a turn when Kathy and a local cop, Lester, get involved. Soon the passive aggressive struggles over the house turn into full out war.

This is certainly not a beach read, but it is engaging. There is a steady under current of suspense that makes you want to know more about the characters and what will develop. The Colonel and Kathy both have broken pasts, albeit for very different reasons. The reader may identify with the characters, but they are not particularly heartwarming people. The writing style is a strong suit in this novel. The characters have distinct voices and the Colonel's sections are written in dialect with words in Farsi and the sentence structure of someone whose first language is not English. This can be a risky move, but it paid off.

This is a read for those looking for something real and unfiltered. It shows the perspectives of two people who are living hard lives and trying or attempting to get out of their situations and regain some semblance of a normal life. For read alikes, I would say Of Mice and Men by John Steinbeck or As I Lay Dying by William Faulkner.
Posted by Kristin at 8:54 PM No comments: