Helen of Troy is a character who has a lot of drama behind her name. Some see her as a romantic figure, others as selfish. I’ll hold my opinions on that subject. While searching for good books to book talk for 6th graders, I came across Nobody’s Princess by Esther Friesner. This is a young adult story about a young Helen of Sparta, the future Queen of Sparta, and the cause of ever so much trouble.

Helen grows up as a pretty girl. Everyone says so and although she does not know what pretty is she accepts it. However, when Helen turns 12/13 she starts changing. Her hormones kick in and she becomes awkward (I don’t miss those times). She is no longer sure of herself and she certainly does not want to practice the womanly arts of weaving and sewing. Helen wants to redefine herself and become her own person. She wants to learn to fight, ride, and run like her brothers, but a girl isn't supposed to do those things! But Helen is crafty and determined. Surely she can find a way to learn what she wants and have the adventures she’s always dreamed of! 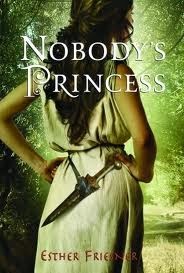 This was a fast paced story. The action kept moving and I wanted to continue reading. Helen is a spirited young woman and I enjoyed her as a character for the most part. She is determined and knows what she wants. She always finds a way to get what she’s after, perhaps a foreshadowing of the woman she will become.

The other characters played minor roles throughout the tale and it was nice to see some variance. I didn’t like that every character who seemed to enjoy or practice the womanly arts was kind of a bitch, but women who hunted or adventure like men are totally awesome. I mean I get what the author is going for with “not being your average girl”, but it annoys me that every time a girl is “different” she’s masculine or enjoys something only men are supposed to do.

An aspect of the story I truly enjoyed was seeing how the gods and goddesses were worshiped. The author had her characters making sacrifices, praying, and worshiping different gods/goddesses throughout the text. It was great to get to see this in context. It was interesting to see what the characters actually thought about their deities and who would be prayed to/worshiped depending on the task/season.

I got through this book quickly and enjoyed it. It was a fun read, but it wasn't spectacular. If you like mythology and historical fiction this is right up your alley.
Posted by Kristin at 10:47 AM No comments: