Ok so my title sounds like a pirate and this story is backwoods, not open ocean, but it just felt right. The Whiskey Rebels by David Liss is on the docket today and what a case it makes for itself!

I tend to get a wee bit nervous with adult historical fiction. It can seem more like nonfiction sometimes and just be tedious. When I originally heard about The Whiskey Rebels my original thought was the above, that it would be boring and long, but it was about whiskey...and rebels...so it had to have something good going on between those covers. One weekend while traversing the great Midwest in my loyal green stallion (also known as my Sebring), I decided to partake of this book on CD instead of drinking in the glorious Midwestern landscape...of corn fields, and flat ground. Sixteen CDs later, I fell back in love with historical fiction. 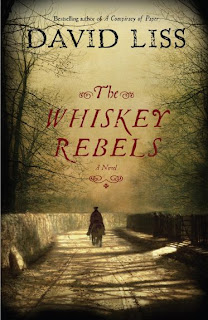 The Whiskey Rebels is taken from two different perspectives. One the disgraced former American spy, Ethan Saunders, who finds himself caught up in the affairs of his former love that leads down a long and winding road and Joan Maycott, the strong willed, intelligent, determined woman who began a plot to get the justice that is owed her. Both characters have stories that keep the pages turning and plots that move the reader along. Through a labyrinth of historical figures and settings, the reader learns about life on the frontier and life in the city post-Revolution. The underlying plot of this story is rich, detailed and well thought out. Not only does the reader get a sense of the era, but they become engrossed in the characters.

Ethan Saunders is a rogue. At the beginning of the novel, he seeks only escape from his life through sleeping around and drinking, but he is clever, sly, intelligent, cunning, and usually, pretty damn funny. All in all, you love the guy. He has a moral code that bends to his will, but he is an honorable man even if society does not see him that way.

Joan is a determined woman from the moment the audience meets her to the end. She is candid, intelligent and bold for a woman of her time, but she knows what she wants and she goes for it. I envy her ability to know her own mind. She has morals and values that she sticks to, and when wronged, she is determined to make those who ruined her pay the price that a corrupt system would not extract. Vengeance is a dish best served cold and Joan is brilliant in her method.

The first thing that got me was the quality of the reading and production. There was music at the beginning and the end of each CD that fit perfectly and the actor who read, Christopher Lane, did a brilliant job portraying each character in a different way that made them all distinguishable. Just like in film, audio actors make all the difference between a good book and a disaster. Lane has a commanding, masculine voice that never got old. Truly enjoyable to listen to.

The book keeps moving and although there were times when Joan explained an economic practice that I zoned out a bit, I was always avidly listening. I truly liked the characters and thought the plot was well constructed. It is a lengthy read and the author probably could cut some of the writing out, but I did not think he was long winded or overly explicative. I will certainly be looking for more David Liss books in the future.
Posted by Kristin at 4:20 PM No comments:

Back to the Blog!

Well it has been ever too long since I last posted. Life gets in the way and I haven't felt much like writing lately, so I have ignored my blog. Well I suppose it's time to start writing about what I've been reading. I'm supposed to be writing this for my own good, so I have a source to look back at when I need recommendations and ideas. Here we go then!!

I've read/listened to two books recently that were not as satisfying as I hoped. Don't you hate it when you're looking forward to reading something and you get all the way through it and think "well I won't remember that one!" Me too. After both these books I had to go back to a classic that I knew wouldn't disappoint and I could breeze through, so I could move onto a new (perhaps risky) read. 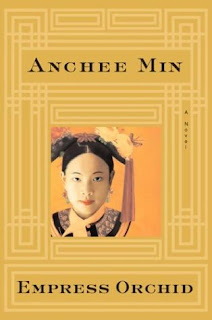 Well book one was Empress Orchid by Anchee Min. I love royal historic novels. They're exotic because of the difference in era, culture, and the royal court. I was so looking forward to the tale of a normal woman who ended up as Empress of China and her climb to power. I don't know much about China and don't often read novels focused on Asia, so this was definitely exotic for me.

This novel starts with Orchid's poor family. Her father, a governor of a poor district, has just died and they can hardly afford to take him to Peking and bury him. The family ends up staying in Peking, and while there, the call comes for all Manchu women with family in the governing class and above can try there luck to become one of the Emperor's brides or a concubine. From here, Orchid makes her way through the process and into the Imperial court where she must seek the Emperor's attention, work her way through the intricacies of court life, and conquer political enemies. On top of all of this, however, Orchid is still a woman, and later a mother, who craves the attention of a man and the love of her child. She wants a life that she gave up, but must try to make the best of a glamorous life that is crumbling apart as China fights off outsiders.

I expected a dramatic, lush, exciting drama about court life in China and a female who takes the lead. In this novel, you certainly get details about court life and you see the start of a woman who is taking charge, to be continued with The Last Empress, but I didn't feel as connected with Orchid or the story as I hoped. I thought the text skipped around and within a section, it would suddenly allude to something that was going to happen, but even when that event happened it was not as dramatic as originally implied. There would be details thrown in that did not fit or were superfluous to what was going on. Keep it simple and make what you put in the text good. Although I thought this was a fine read, I didn't think it was great, and I won't remember it down the line.

Next I listened to the book The Particular Sadness of Lemon Cake by Aimee Bender. I saw this on the staff recommendations at my library and I've heard about it around the web.

Welcome to the world of magical realism. The genre of magical realism is characterized by one thing being supernatural, magical, or out of the norm. Typically only a few characters or maybe only one has a special ability. The world is the exact same as what we live in. Think of movies like "Practical Magic" or "Chocolat". Well I was very excited about The Particular Sadness of Lemon Cake because I thought it was going to be kind of chick lit-ish and light. Not so much. 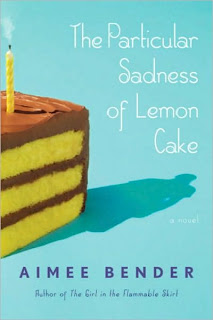 Rose was a pretty normal girl until her ninth birthday when she tasted her mother's lemon cake. Instead of tasting the sweet and sour flavor of her favorite cake, she tasted sadness, depression, and self doubt. From this day on, Rose can taste the feelings of those who cooked the food she eats. She does not seem to be the only one with a strange gift. Her brother is harboring a secret that ends up affecting their whole family.


This book is more about the family relationship. It's about Rose growing up and figuring out who to tell and how to deal with her difference. I was not expecting this to be so serious. It was not a light read at all. Although parts of the book can be probing and question our relationships and feelings, for the most part I just didn't feel it. It wasn't terribly deep or new. An annoyance in the book was that Rose would skip occasionally from the present to future or past happenings. It was hard to follow these instances, perhaps because I was listening and couldn't see any breaks between paragraphs, but I was confused by the jumping between different time frames. On top of that, Rose would say things like "that was the last time I saw him", but later on she talked about seeing that person again. Again it might have been a flashback, but it was terribly confusing when the author jumped back and forth.

All in all, those two books, not my favorite. I will proceed to ax them from my memory to make room for more important things.

Until next time my dear reader.
Posted by Kristin at 7:21 PM No comments: