Little Be by Chris Cleave is the story of two women from two different worlds who end up colliding through a tragic incident. Little Bee is a young woman who is in an immigration detention center outside of London, England. Originally from Nigeria, she fled from her mother country because of men who murdered her family, only to find herself detained in another uncomfortable circumstance. Sarah is a British magazine editor who happened to be with her husband on a beach in Nigeria when Little Bee and her sister ran across her path. The story picks up in England a couple years later. Little Bee is just getting out of jail, and Sarah’s husband has just committed suicide. In each other, these two women find a comrade. Sarah and Little Bee struggle with the past horror they both went through and look to a future where they can both be freed from the pain of what was inflicted upon them. 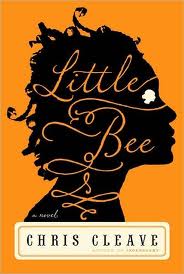 On the back of the book, there is very little description given as to what the plot of the story is. “Once you have read it, you’ll want to tell your friends about it. When you do, please don’t tell them what happens. The magic is in how the story unfolds.” That is the quotation from the back cover and it is a letdown. This is a great marketing technique to make readers want to know the mystery behind the story, but all in all, this was not a Sixth Sense kind of novel where you cannot give away the ending or ruin the story. Like many novels, you are not given the full story at the beginning, it unfolds for you.
What makes this novel think it is so special that readers must be forewarned not to talk about it with those who haven’t read it? If its only special feature is that you don’t know the major plot point prior to reading it, it’s a pretty pathetic novel.

The novel is split between the voice of Little Bee and Sarah. I found myself rolling my eyes during Little Bee’s chapters. The writing is well done, but the things the author has Little Bee say and think are a little out there. It was over the top. Sarah is practical, but Little Bee is more of a dreamer, which makes sense when you find out the meaning of her real name.

I didn't particularly like the characters and I wasn't a fan of the story. I liked where the story was starting to go at the end, but then was disappointed by the vague ending.

If you are into immigration issues and refugees, then this is a book that may interest you. For me, it didn't do anything. It brought to light that yes, we have issues with immigrants and this young woman’s story was tragic, but I just wasn't interested. Maybe that makes me like everyone else who overlook real world problems, but this is my fun reading time, damn it! I’m allowed to overlook problems when I need an escape.
Posted by Kristin at 10:43 AM No comments:

In June, I will be hosting a number of Jane Austen themed programs including a Jane Austen impersonator. In preparation for the festivities, it’s my duty to read as much Austen inspired literature as possible. What a difficult life I leadJ Thus here is the first installment of my Austen Inspired reading.

Napoleon Bonaparte has escaped Elba and is back on the continent to claim France as his dominion. Here begins our tale. Over in jolly old England we meet back up with two of our favorite Colonels from Pride and Prejudice and Sense and Sensibility, that is Colonel Fitzwilliam and Colonel Brandon. There is a newcomer to this bunch in the form of former rogue, Colonel Buford. We follow the three through their romantic entanglements with other well-known characters and then in the end, at the Battle of Waterloo. This novel focuses on new relationships forming between Colonel Buford and Caroline Bingley along with Colonel Fitzwilliam and Anne de Bourgh. 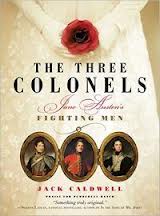 Although it had its eye rolling love scene, this novel was well done. Jack Caldwell did a wonderful job of bringing to life new characters, while keeping the old relationships at arm’s length as to not ruin the relationship the reader had formed with Jane Austen’s characters in former novels. He writes about characters who are seldom mentioned or minor characters in her other books. In this way, he doesn't have the problem of both remaining true to Austen’s main characters and pleasing fans by remaining faithful, yet adding onto the stories.

I found some of the characters' actions a bit unbelievable. For example, though I truly enjoyed her as a character in this book, I do not know that Caroline Bingley could completely reform herself from the woman she was in P&P. Caldwell goes into the detail of how Caroline sees the error of her ways, but it’s just a little too righteous for a character who was such a social climbing ninny. He also has Mr. Collins have a realization about Lady Catherine and even apologize for his errors. No. Stop right there. Mr. Collins is fun and annoying because he is so oblivious. Don’t turn him into something he isn't.

I truly enjoyed the parallel story lines and even the intermingling of other notorious characters from Persuasion and Northranger Abbey. Caldwell also did an excellent job portraying the characters and military strategy during the Battle of Waterloo. Other than my discomfiture with characters’ actions, as stated above, I did not have any complaints. The story is fast and compelling. I found myself wanting to stay up late and get up early to read this novel.

If you are a Jane Austen fan, might I suggest An Assemble Such as This by Pamela Aidan. It is the first in a trio of books written from Fitzwilliam Darcy’s perspective as his journal during the period of Pride and Prejudice.
Posted by Kristin at 8:29 AM 2 comments:

A friend recommended a book to me and was rather insistent upon my taking a look at it because she thought it was so sweet. Because she’s my best friend and it seemed to mean a lot to her, I picked up the book. Mary Higgins Clark typically writes mystery/suspense novels, but she had a hankering to write a historical romance with none other than our nation’s first president, George Washington, and his lovely wife, Martha or as she was called, Patsy. The book is A Mount Vernon Love Story and it works on two fronts seeing as George loved his home, Mount Vernon, and he loved Patsy, who eventually lived in Mount Vernon. 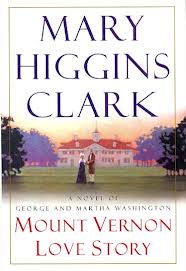 The novel starts as Washington is stepping down from the Presidency and handing the reigns to Adams. From here, George reminisces about his younger years and thus other chapters take place before and during the Revolution. Every two chapters or so, the novel flits back to George as he’s leaving the Presidency and anticipating his return to Mount Vernon. The novel deals mostly with Washington’s personal life, but of course his military and public years cannot be ignored. This, however, is a novel about love and the trials that George deals with on that front. God knows that even a general has a hard time with strategy when it comes to love.

The novel was sweet. My dear friend was right. It is an easy read, weighing in at a measly 230 pages. I enjoyed learning about the personal history of George Washington and a little about Martha. Washington was a very measured and disciplined man, so seeing his affection and adoration of his wife and stepchildren was enlightening. My problems with the book stem from the writing style and the depth of the story.

Obviously, when talking about the public and personal life of a president, there’s a lot to cover. I applaud Clark for taking on such an enormous undertaking, but I felt there was a lot missing. She skimmed over major events in Washington’s life and did not go as in depth with his personal life as she could. This is a rich subject and I felt that it only touched on the surface and quickly ran on to the next event. The other thing that threw me off was the chapter to chapter jumps from old George to young George and the terrible transitions from one to the next. Yuck. Just do a chapter at the beginning when he’s old and have a good transition into his early years, then at the end go back to him going to Mount Vernon after his term is finished. Boom. I just made your book better Mary Higgins Clark.

Posted by Kristin at 5:22 PM No comments: