Home on the Range with "Pride and Prejudice"

After reading Jack Caldwell’s other book, The ThreeColonels, I found he wrote the book Pemberley Ranch. Seeing as it’s the Bicentenary of Pride and Prejudice I decided that this should be my next challenge book (even though I said I’d read something else for June's challenge). Who can pass up Mr. Darcy, cowboy?

It’s about five years after the Civil War ended and the Bennet family is moving from Meryton, Ohio to Rosings, Texas. Beth Bennet is not excited for the move because of her unbridled hate of Southerners due to the death of her brother in the war. But Texas holds some surprises. Not only is it beautiful country, but the people aren't half bad either, including the one northerner, George Whitehead. Jane marries Dr. Bingley, and the Bennets are close friends with many of the southern folk. Will Darcy is another story, however. He may own half the land and be a dashing man, but who can like such a snob? Certainly not Beth! When things at the bank, and scoundrels in town start becoming more menacing, perhaps Will Darcy can be of use. 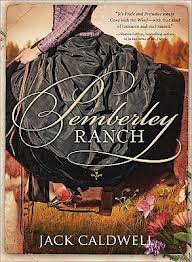 With the emergence of many well-known characters from a slew of Jane Austen books, including Henry Tilney, the town’s pastor and Mary Bennet’s beau, the story keeps your interest. Pride and Prejudice in antebellum Texas actually works… Not only do we hear from Beth, but we also hear Darcy’s point of view as well. It was refreshing to hear from the man himself. This Darcy is not the snob he is in the original. I actually found that he was a fine character, but Beth was a little overbearing and judgmental. Instead of hearing mainly from her, I felt the focus was more on Darcy, which wasn't a bad thing. It was refreshing to hear more about Mary as well. I loved that she and Tilney were sweet on each other. Their relationship made Mary a focus and not just a satire in the novel. Charlotte Lucas and Fitz are also an item in this novel and get a little more time on the page, which was fun to read about. While playing up some characters/relationships, as mentioned before, others were not really mentioned. Jane and Bingley were married right off the bat and were pretty much left alone. The villains  George Whitehead, Billy Collins, and Denny “the Kid”, were all played WAY up. They went from being annoying or morally corrupt, to being the worst of the worst. It was a bit much. I found that Caldwell may have tried a little too hard on some characters while not focusing enough on the nuance of others, like Beth.

The story is essentially the same, but it puts a very different spin on the characters and setting. I wanted to keep reading even though I felt the story became over the top towards the end.  I enjoyed the placement of P&P in the south. This is a fun book. If you take it too seriously or are too staunch on your P&P fan fiction, you might hate it, but for my part, I found it was a fun, quick read.

Here are some other fun Pride and Prejudice fan fictions:

Reflecting on Jane in June

Jane in June. Goodbye my friend! After a year of planning, my Jane in June programs are finished. Now it’s time to reflect on what I learned and how excited I am to continue reading and learning about my favorite author.

I started working at my library a year ago, almost exactly. One of my first programming ideas was a tea and talk about Jane Austen. My director got a hold of the idea and told me to expand it, thus Jane in June was born. I had three programs. 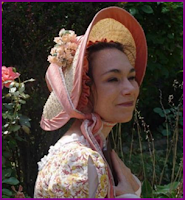 The first was my amazing impersonator, Debra Miller, who is a learning theater actor. She wrote her one woman play of Jane Austen mainly from the letters Jane and Cassandra, Jane’s sister, wrote to one another. Not only did Debra look like Jane, but her performance was mesmerizing. She did a fabulous job of interpreting Jane into this performance. She started her performance as Jane after Sense and Sensibility, Pride and Prejudice and Mansfield Park were published and she started becoming a minor celebrity.  I learned a lot about Miss Austen’s life and inspiration, her struggles and triumphs. It was very inspirational and Debra did a great job of talking up books for people to check out, which they did. It always seems like pulling teeth to get people to check out the books we bring to programs.

The second program was a “Jane Austen Tea”. I bought three different kinds of tea and had 5 tea pots. I asked all the attendants to bring a dish to pair with tea. About 12 women came and everyone brought something delicious! Luckily, a coworker was available to make the tea and distribute it throughout the program. We ate, drank, and chatted about Jane Austen’s books, her life, her inspiration, fan fiction, the lasting impressions she has left, and a load of other topics. The women truly enjoyed the event and I was able to let everyone take a free book home. I loved this event. It was not too much work to set up and was low cost. What goes better together than beverages and books!? The best part was, since it was a rainy cooler day, all the women commented on how happy they were to have tea. Truly fun and fabulous. I will certainly do this again and highly suggest you to try it with friends, family, or patrons!

My third and final program was a presentation called “Austen in Our Time”. A local woman, Amy, who is a minor Jane Austen expert, JASNA member (Jane Austen Society of North America), writer, and blogger along with working at a Jane Austen bookstore, was my presenter. She discussed the rise of Austen’s fame through sequels, variations, plays, and finished works. Although people were writing nonfiction and fiction books about Jane Austen and her characters before the 1990s, it was after Colin Firth jumped into the lake that Austen fan fiction and nonfiction really took off. In fact, 1995, saw a slew of Jane Austen books turned into movies, which really launched her into our generation. Amy talked about why she believes Austen above all other authors has had such a strong reception and become such a booming force. She also brought books and other materials from the store to sell, which the patrons enjoyed.

Jane in June was a success. I wish more people would have attended the Jane Austen impersonator, but those who did truly adored it and learned a lot. This was my first solo set of programs and has gone on to inspire another author set of programs next year, Edgar Allen Poe. I’ll be going from satire and romance to angst and creepiness. Sounds like the decline of a lot of my romantic relationships.

Sometimes you just need a book that’s a hug. Something comforting, lovely, and sweet that makes you feel happy without too much drama. Saving CeeCee Honeycutt by Beth Hoffman was a perfect literary hug. 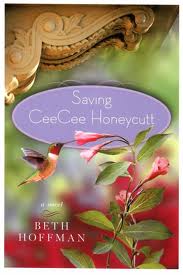 Cecelia, CeeCee, is a twelve year old girl living with her delusional mother. Mrs. Honeycutt has become less and less lucid over the years and continues to think of herself as the pageant queen she once was. While CeeCee’s mama is dressing up like the prom queen, her daddy is never home leaving her to be in charge of her crazy mother. Way leads unto way and Mrs. Honeycutt ends up dying. Ceecee is transported to her Great Aunt Tootie’s house in Savannah, where she meets a slew of eccentric women. Each one helps CeeCee come out of her shell, deal with her past, and move forward.

This is a character driven book. There isn’t a ton of drama to propel the story forward, and the drama that occurs is quickly solved or nothing becomes of it. You want to keep reading for the humorous, eccentric characters and the captivating setting. There’s something about Savannah and the South that is magical, comforting, and charming.  Savannah especially holds a certain amount of mystery and exotic allure. In CeeCee, the audience sees the exotic in the characters more than the setting and the magic is in the gardens and buildings.

Ceecee is a sweet character. You like her and relate with her and she certainly has her problems, making her a realistic figure. Aunt Tootie is a generous and caring woman. Oletta, the cook and housekeeper, is funny and loving. The almost entirely female cast of characters creates a sense of sisterhood and friendship among women without the competition and contempt that tends to happen when there is a large group of females.

Although I felt it lacked some rising action, it worked out. Some might find the lack of problem events annoying, but for me, there was just enough. Ceecee continues dealing with her Mom’s death throughout the book, so that gave enough groundwork to frame the story around. I just loved the comforting sweetness of the story and characters. I felt wrapped in a blanket of southern charm and reading euphoria.

If you’re looking for something a little gentler, with a southern twist, give Saving CeeCee Honeycutt a try. Here are some other titles to read if you’re into this.

Posted by Kristin at 1:37 PM No comments: