Underdogs and Evolution in Football

I'm not much of a sports person. Sure I enjoy watching football, basketball, baseball when I'm at a bar or at an actual game, but it's not something I seek out and it's not an area I have a lot of knowledge of. My parents shoved me into sports, so I've played most major sports and still enjoy playing when I get the chance. Well I didn't know what to think when my boyfriend told me that "The Blind Side", the book, was more about the football market and economy of the NFL than the gooshy underdog story. That sounds...out of my comfort level. But I thought, heck why not!

Well if you've seen the movie, then you understand the gist of the book. Poor, unrecognized, unloved, black high school boy gets recognized and finds his place in the world. It's a great story. Well that's what about half to two thirds of this book is about. I loved reading about Michael Oher and his adopted family the Tuohys. The writing in this book is accessible and the story is anything but dry, which (I must admit) I often find non-fiction to be. For the most part, that part of the book and the movie are very similar with a few differences spotted throughout. 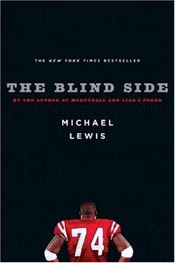 The other half to two thirds of the book are about football. How the game has changed the role of the players and strategies for drafting and playing. The subtitle of the book is "evolution of a game", so Michael's story is only part of the book. It just happens that he lives up to the role of the elusive right side offensive tackle (yes this book taught me some football lingo though I really didn't retain much of it), which happens to be the position that Michael Lewis places emphasis on in the book. The first chapter of the book had my head spinning. What is all this jargon? Where does which player play? There is strategy to this brute of a sport? After those ten pages or so I almost put it down, but I'm happy I continued with it. I was naive and I confess this book helped me see that there's a reason these men get paid as much as they do. There lives are often cut short due to the mass amounts of physical damage they do to their bodies during their years playing the game. These are people who were born to play the sport because of their physical make up and their athletic ability. The offensive tackle cannot just be some sumo wrestler sized man, he must also be light on his feet and fast. Those are rare qualities in so large a man.

A point in the story that somewhat bothers me is the adopting of an underprivileged child for his athletic ability. The Tuohy family did not adopt Michael merely for his skills in sports, I know that, but they do discuss taking on the task again. I am all for helping people get educated and rise up to their full potential, but it seemed like the Tuohys became interested in only helping those with athletic ability. What about the others? Sure sports are great, but what about those kids who are intelligent and can make a good life for themselves, but they're stuck in the wrong circumstances? Ok maybe that is cutting off more than they can chew. At least they are trying to help those who need it instead of just overlooking the issue. There are programs out there that only want to help kids with certain grade point averages, so why not have programs that want to help student athletes. I still have some quandaries with it, but it's better than nothing.

Lewis did an eloquent job of telling an 'against all odds' story along with exploring the evolution of the game of football. I'll admit I enjoyed Michael's story more than the chapters about how strategy changed and reassessing the importance of certain positions. For the most part I thought the story read more like a novel than a non-fiction. I'm happy I stepped out of my comfort zone for this book. If you're into football, even slightly, you should consider giving this book a read. Michael Oher and the Tuohy family are lovable and Lewis does a fine job of explaining the game of football and presenting a number of view points and sources for his story. He made it accessible to the avid football fan along with the novice. Cheers to you Mr. Lewis for bringing outsiders into the world of football and going beyond just the dark horse story to create a near seamless conglomerate.
Posted by Kristin at 1:42 PM No comments:

I Vant to see BLOOD!!

Hello, my name is Miss Elizabeth, and I am addicted to the Sookie Stackhouse series. It all started a couple summers ago when I decided to give the first one a shot after seeing True Blood, the HBO series that's based off of Charlaine Harris's books. After that first sinful taste of the Southern vampire series, I was hooked. Soon I was making weekly runs to Target to pick up the next book in the series and finally making frenzied requests at the library for the newest addition. Then they ran out. Where did all the Stackhouse books go? That's when I went cold turkey. But Harris finally published another one! I jumped off that wagon pretty quick, let me tell you! 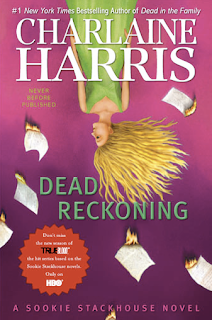 "Dead Reckoning" is the 11th book in the Southern Vamp series and yet again, Miss Stackhouse has enemies trying to kill her and secrets to be revealed. I cannot tell you anymore than that or risk giving away all sorts of plots in the other books if you haven't read them. I gotta say, Sookie is not one of my favorite characters, but I do love these books. There's always something happening and more supernatural creatures waiting around the corner. Her telepathy makes her an asset to the supes around her, but her network of vampire "friends" and other protectors keeps her safe, or so she thinks. She is a woman who can handle her problems and tries her damnedest to keep her life under control while exterior forces push her into the line of fire. I appreciate her independence and her no-nonsense attitude, but when I think of her, I think of Anna Paquin (the actress who plays Sookie in True Blood) and that leaves a bad taste in my mouth. I know that's silly, but I just can't help it. The other characters in these books are just as fun as Sookie, if not more so. Pam, a vampire and right hand woman of Eric the viking vampire (yum), is one of my favorite characters. She's an oxymoron in the way she dresses and the way she acts. She's a bad ass Alice in Wonderland who thinks nothing of killing and has a dry, black sense of humor. Then of course Eric, viking vampire, is a hot piece who is a vampire through and through. He is typically very cold, pun intended, and keeps his hand close to his chest, but that impenetrable personality paired with his charm makes him irresistible.

Sure this is not a masterpiece of literature, but it is a FUN read!! One of the nice things about this series is that each book leads right into the next without any hassle. It's assumed you know the past stories, so chapters aren't spent catching the reader up on what's been going down. There are always new developments, but plot lines run over between books, or even come back a few books later. When I think of traditional summer reading, I think of mindless, easy books and I must say this one fits the ticket. Sure you may have to recall details from past books in the series, but there's no thinking involved. The only problem is you may find yourself becoming antisocial because all you want to do is read. Who needs friends anyways?

I truly love this series. It's my guilty reading pleasure. Admitting the problem is one step closer to recovery, right? Well if reading about vampires, fairies, werewolves, and a telepath is wrong, then I don't want to be right! Cut me a line of that and keep that wagon away. Mama's on a high.
Posted by Kristin at 8:09 AM 2 comments:

I gave into the buzz. After at least a year of hearing how awesome the books in the late Stieg Larsson's Millennium series are I relented and picked up the first book "The Girl with the Dragon Tattoo". As silly as it is, I usually hesitate when it comes to bestsellers. My snobby bibliophile comes out and up goes my nose. "These plebeians don't know what good writing really is. They're all just drawn to the latest sexed book, thrown together in a rush and hardly edited [all said in my Brahman accent]." Who is this monster? O yeah, it's me. Time to set aside my ugly self and try this international bestseller.

Well if you're one of the few who have yet to read this book, let me give you a drive-by summary. Mikael Blomkvist, a financial investigatory journalist, was recently convicted of libel. Lisbeth Salandar is a misunderstood, antisocial young woman who has a penchant for investigating/researching people and a desire to solve her own problems. Mikael is hired by the old CEO of a huge corporation to solve a mystery and soon Salandar and Mikael partner up to figure this thing out. There is so much more to the story and so many other angles, but I don't want to give anything away. The weaving together of stories is intricate. The main characters are interesting, especially Salandar, a girl so unlike anyone I've ever met or would even look twice at.

Overall it was a fun book. Fantastic beach read! The writing is good, and the story is rich. Again, Salandar is a compelling character, who I want to see more from. You never know what this character will do or if you'll ever hear her full story, which makes me want to see more from her. After all the hype, I was a smidgen disappointed. Let me stress, ONLY A SMIDGEN. Still a great read, especially as far as 'who done its' go. I guess I just expected a lot because I heard so much about the book. It's not a book I will rave about to others or name as a favorite, but I see why people really like it and all in all I liked the book and will probably end up reading the remaining two in the series. Who knows, maybe I will write love blogs to "The Girl Who Played with Fire" and "The Girl Who Kicked the Hornet's Nest". Only time will tell.
Posted by Kristin at 7:03 PM 1 comment: