The Meaning Behind Words

Nazi Germany1939-1943. We all know what was happening at that time and in that location. A nation who had previously been squelched and left in the gutter in a past war finally found a leader to pull it up by the boot straps. Unfortunately, in order to bolster the German spirit, it was deemed necessary to find a target, an outlet for resentment and bitterness. But just because one man's words struck the Germans dumb doesn't mean that every German was taken in by his hateful words. 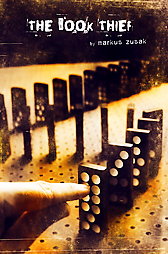 "The Book Thief" is about words. Liesel Meminger is a young girl who becomes the foster child of Hans and Rosa Hubermann. While dealing with her own past haunts, Liesle discovers the love of a silver-eyed man, a wooden spoon wielding woman, a lemon haired boy, and a boxing Jew. The struggle and success she finds through learning to read and becoming a bibliophile turns into her true love. In order to cultivate her passion for reading, Liesel begins stealing books. Liesel discovers that although the words in her books transport her to better places, the words spoken and written in Hitler's Germany decimate the lives of thousands. The dual nature of written and spoken words are examined throughout this novel.

Death narrates this novel, which creates a unique aspect. 'Well that's morbid', you may think, but it's WWII, so death surrounds everything, and it is an inspired idea in this novel. Death is not portrayed as a cold or heartless being in the writing. Instead, his narrating encompasses Liesel's story and that of the other characters and happenings throughout the war.

"The Book Thief" by Markus Zusak is an easy, touching, emotional read for young adults and adults alike. The story is compelling with many different aspects and characters to learn to love. I've heard many people speak of this book fondly and I must agree. It is a good read and gives a different side to the war than other novels.
Posted by Kristin at 4:10 PM