More than your "Bunny Rabbit"

The summer before sophomore year at her elite boarding school, Frankie Landau-Banks blossomed. She went from being an awkward girl to a fully-fledged beautiful woman. Her transformation turns the head of Matthew Livingston, a popular and good-looking senior, who she soon starts dating. Frankie, however, is much more than a pretty face and the little girl her family nicknamed "Bunny Rabbit". Behind those beautiful eyes lives a clever, devious, and underestimated intelligence, one that will one day make her head of the CIA, Secretary of State, or the next great American writer. When Matthew keeps secrets from Frankie about a secret society, Frankie decides to show him and his friends that she is more than worthy to be a part of their club and their world. What follows is a story of pranks, deception, and longing to be recognized in E. Lockhart’s The Disreputable History of Frankie Landau-Banks. 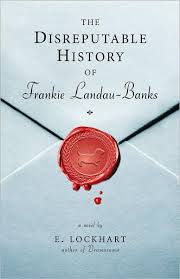 Recently my friend and I discussed an article about strong female characters. This is a bit off topic, but the article basically talks about how a strong female character is annoying and too boxed in. Male characters are never called strong male characters, but a strong female character puts an exact picture in your head of a bad ass, emotionless (other than anger), beautiful woman. We want 3D women who can be realistic. Back to Frankie, Frankie is a great example of a multi-dimensional character. She’s insecure, massively intelligent, inventive, beautiful, athletic, worried, brave, unsure, and still figuring herself out. I truly enjoyed her even when she thought about impressing her boyfriend a bit too much. This is what we do. We want someone we really like to think we’re astonishingly wonderful, and in Frankie’s case, what she did sure was astonishing.

From the dust jacket, I expected Frankie to be a confidant and already snarky, devious minded lady, but this is her story of becoming that girl. I looked forward to snuggling up with this book and reading about Frankie’s plotting. My biggest complaint is that there isn't a sequel. I enjoyed the novel. It was easy to read, thought provoking, and introduced a fresh character.