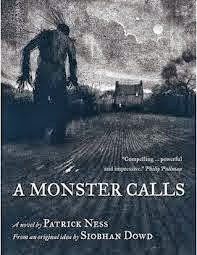 “’You do not write your life with words, the monster said. You write it with actions. What you think is not important. It is only important what you do.´” A Monster Calls by Patrick Ness is a story about truth, power, and life. Conor begins getting nightly visits from a monster who insists on telling him three tales. Where regular children might be afraid of a giant monster at their window, Conor has another nightmare that haunts him. A nightmare he fears more than anything else, because it speaks the truth. During the day, Conor must face a reality he hates. His mother has cancer and everyone treats him differently. His teachers pity him, his classmates can’t look at him, and the only person treating Conor like a real kid is his bully. His nightly visitor becomes normal, but this monster is demanding from him something he’s not willing to face. The truth.

Patrick Ness wrote a beautiful book. A book that speaks the truth: the ugly, wicked, honest truth. This is a children’s book and addresses life and illness unlike any children’s book I’ve encountered. It isn’t smiles and pats on the back, it’s real life. Fear, anxiety, anger. Real feelings. One message of the book, speaking truth, applies to all of us. Speak the truth to children and this book does that. Illness is a part of life and it’s good that there is a book that kids who may be surrounded by it can turn to.

Conor is a great character. He is not a polished boy who finds a way to be good, but a kid who is going through a tough situation and acting out because of it. He does some terrible things, he feels hurt, angry, and sad and takes it out on those around him. Haven’t we all done that? I didn't particularly like him, but i
t was nice to read a fictional character who acts like a real person.

My favorite part of the book was the ink drawings. They are creepy and sinister looking and paired so perfectly with the text. It added a different element to the story. The drawings also make this a more appealing book to reluctant readers.

I highly suggest this to adults and kids alike. It’s a beautiful story that encompasses storytelling elements and difficult subjects in an accessible way.
Posted by Kristin at 12:45 PM