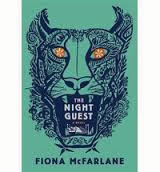 Ruth is an aging woman who lives alone by the sea in Australia. She doesn't do much with her days and lives a somewhat lonely existence. One day a mysterious woman, Frida, shows up and becomes Ruth’s carer. The woman reminds Ruth of her childhood in Fiji. Soon Ruth is calling on her old love and her life is starting to become a bit of a blur. The once perceptive woman begins a slow spiral into forgetfulness and insecurity.

Here is a book that makes you feel unsure of what is happening. At the beginning of the book, you know Ruth has some troubles, but it doesn't seem harmful and she seems to be content if not a little bored. Frida shows up and starts taking over small tasks, then larger tasks, until she becomes an absolute essential to Ruth’s life. It seems as Frida does more for Ruth that Ruth’s ability to function mentally and physically deteriorates. On top of Ruth’s health and mental state, the reader questions Frida’s intentions. She comes in out of nowhere, offers assistance, and starts becoming quite a force in Ruth’s life. It’s a strange relationship.

The main reason I picked up this book was a) the cover was pretty awesome, and b) the description talked about Ruth’s history in Fiji and a tiger, which sounded very intriguing. The book, however, was much different than I anticipated; a little more sinister and not as exotic. In the end, I’m glad I read it. Here is a book that gave a striking picture of aging and the deteriorating mind. It takes the mundane and lonely tasks in one woman’s small world and puts a microscope to them. McFarlane does a fine job of describing the ordinary and the sad little nothings. You felt for Ruth and the frustration she had when she forgot something or had to be reminded of little things. At the same time, you hope this stranger, Frida, is who she says she is, but you question.
Posted by Kristin at 4:28 PM