A Wind in the Door

In second grade, my very bestest friend, also named Kristin (the reason we became besties), had our teacher read A Wrinkle in Time by Madeleine L’Engle aloud to us. Now Kristin is a very smart cookie. She was way ahead of me and a voracious and sophisticated reader ahead of her time. At the age of 7/8, A Wrinkle in Time was a bit ahead of me, but I remember being thoroughly absorbed in it. I reread the book a few years ago and am astonished that it was read to me at 7. It’s kind of intense! Well I decided I really wanted to finish the series because it’s a classic and I love the titles.

A Wind in the Door is the second book in the Time series. Charles Wallace, the youngest of the Murry siblings has just started school and is coming home bloodied and bruised because he doesn’t fit in. Now he is seeing dragons and starting to get very sick. Meg, his older sister, soon discovers the “dragon” as well and is taken on a journey with Calvin O’Keefe and a few new arrivals through the universe and into the mitochondirion of Charles Wallace. This is a journey to save Charles Wallace’s life and help dispose of a force so hateful that it seeks to extinguish all life. 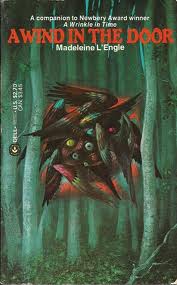 The Time series is most certainly science fiction. The Murry parents are both scientists, and a lot of the extraordinary things that happen to the children revolve around science and different discoveries the parents are currently making. Although I am thrown off by science-y science fiction (chemistry and physics you allude me yet again!), this book was not out of my comprehension. I mean it is for children, so I would hope it wouldn’t be over my head. I kept waiting for the children to go somewhere out of this world and it wasn’t until about half way through the book that they finally left God’s green earth. In this I was frustrated because I was impatiently waiting for more to come. My expectations were not met with a whole new universe until the book was about half done. Then the problem became that events got melodramatic. Maybe I’m too old to be reading this book, but the way Meg interacted with the other characters and the level of drama annoyed me. There was too much explanation on top of panic and confusion. Everything got jumbled together and it felt like we were rushing to get to the end.

Although I still think it’s a well written classic, it was not my favorite. I will finish the series and I do highly recommend Ms. L’Engle for children who love science or science fiction.
Posted by Kristin at 1:27 PM