Animals are pretty awesome. Statement. No need to even ask your opinion because if you don’t like animals, then I don’t like you. Seriously, you probably don’t have a soul. Well April is National Pet Month, so for the occasion, I read Oogy: the dog only a family could love by Larry Levin. 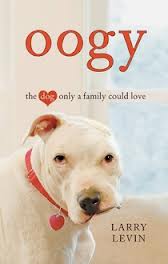 Oogy is the story of a beautiful puppy who was used as bait for fighting dogs and overcame it to become an amazing family member to one lucky family. Oogy was found with half a face because, as a bait dog, another dog attacked and mutilated him. He was a puppy taken to the animal ER and expected not to make it out, but with the help of committed doctors and staff, this resilient puppy returned to health. What is truly extraordinary about Oogy’s story is that even though the dog had obviously been through traumatizing experiences at the hands of humans, he was gentle, loving, and friendly to everyone he met. Never did he snap or show resistance to anyone or anything he came in contact with. Oogy went to a home with the Levins where he thrives. Not only is he a remarkable animal, but he found a remarkable home with people who love him like a son/brother.

Oogy’s story is inspirational. To think that an animal would still trust and love humans after his ordeal is mind boggling. That is the part of the story I loved. Do you think a human could do that? The Levins spoil Oogy and for good reason. To them, he is not just a pet, he’s an individual who has seen and felt more hurt than anyone deserves, and he is a member of the Levin family. At points I felt the level to which Larry went with his pet was a bit overboard, but I’d try to remind myself that Oogy is more of a son to them than a pet. This was not a spectacularly written book and I found myself getting frustrated at chapters that were not about Oogy, but considering the book is barely 200 pages, I skimmed through it pretty quickly.

I recommend skimming through this book. Read the chapters about Oogy because he is an amazing animal and his story is sadly rare. Not many fighting dogs have happy endings. Luckily, this one does.

If you enjoyed this story here are some other suggestions