J.K. Rowling. That sneaky Brit. She went all covert on us and published as Robert Galbraith, and I get it Miss Rowling. Sometimes you want people to assess your work, not based on what you’ve already done. The Cuckoo’s Calling was getting great reviews before the world knew J.K. Rowling was the writer, and for good reason. Now I could make some references to Rowling’s Harry Potter series, but I’m going to respect her new book, which could turn into a series for what it is: different than her other writing. 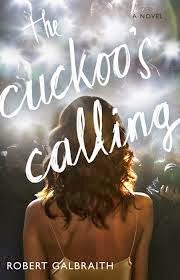 Cormoran Strike is a down on his luck ex-military private investigator. He is struggling with debt, just got out of a relationship, living in his office, and his amputated leg is causing him pain. At the moment his sole client is a woman spying on her husband, not exactly riveting or well-paid work. Then Robin, the new secretary sent by a temp agency, shows up along with an old friend’s brother, John. Robin turns out to be an expensive blessing in disguise and soon becomes Strike’s daily human contact and a fantastic secretary. Then there’s John, a wealthy lawyer, who shows up at Strike’s office with a new case and a pocket full of money. Lula Landry, the famous super model, committed suicide not too long ago, and John, her brother, thinks there’s foul play and insists on having Strike re-investigate. What follows is a who’s who of London. Strike maneuvers his way through the bold and beautiful seeking the truth to who pushed Lula Landry over her balcony.

Rowling wrote a number of compelling characters with great back stories. Strike was a likable character with some skeletons in his closet, a messy family, and a strong work ethic. Robin is one of the first characters introduced to us. She is newly engaged, peppy, smart, and clever. Although working for Strike is supposed to be temporary, she finds herself yearning to stay on and learn the PI trade. Strike and Robin are characters I look forward to reading more about in the future.

A lot of suspects are put on the chopping block throughout the investigation. Strike keeps his cards close, so I was never sure who the killer was. Rowling kept her audience guessing by presenting new evidence, rehashing old evidence, and interviewing witnesses and friends. I enjoyed hearing about Strike stalking around London to seek out testimony. The book deals a lot with the idea of celebrity and the problems Lula had to deal with as a super model. Trusting people was hard because even her “friends” sold her secrets. Then there is the paparazzi who stalk her, fans who think they know her, and a dysfunctional family. Rowling must know a lot about this world and it was interesting to get a small peak inside a life of luxury and the costs it comes at.

I’m not a detective mystery reader, but I enjoyed this novel. The two things I have to say against it are too much detail, and too stuck in the past. The author had paragraphs that made me think “I would just cut this out if I were her editor. That’s completely unnecessary”. I’d skip over sentences and just keep moving. Now since I don’t usually read detective mysteries like this, I don’t know what is typical. This novel was stuck in the past a lot. Strike’s investigating a potential murder meaning he dredges up the past through people’s evidence as to what happened when Lula Landry died. On top of that, however, he reminisced about his newly ended relationship, he thought about the war and his time in the military. Although it was making progress forward, I kept hoping for new events to keep the book from back sliding.

Altogether, I found the book engaging and I very much wanted to hear more about Strike and figure out who the killer was. If you’re a fan of this book or want more like it, try these novels: