Cover art is muy importante. There are billions of books out there. Why choose one in particular? Publishing companies have gotten really good at marketing their materials and an amazing way to do that is to have an eye catching cover. Why pick up the boring blank covered book, when you can get the pretty one instead! Well Holly Black’s The Coldest Girl in Coldtown got me with the rocking cover. So simple, yet so intriguing. Then I read the summary and decided I needed to delve into this book.

In Tana’s world, vampires recently entered the main stream, but in order to contain them and the infection they spread, Coldtowns were created. Coldtowns are places that look glamorous, with their all night parties and fancy dress, over the online videos that are put out. In reality, vampires rule and humans are merely worshipers, a food source, or unwillingly stuck. See once you go into a Coldtown it’s nearly impossible to get out. 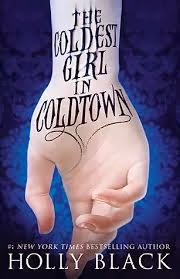 Tana finds herself in a horrifying predicament when she wakes to a house filled with corpses and her ex-boyfriend chained to a bed with a vampire shackled at the end of the bed. Tana decides to save Aidan, her ex, and the vampire, Gavriel. With the infected Aidan, who was bitten, and the mysterious and insane Gavriel, Tana makes her way to Coldtown. During her journey, Tana feels a strange pull to the monstrous Gavriel, but once she enters the city, he disappears with a mission to get revenge. Coldtown is a dark and foreboding place and Tana’s time spent there is fraught with problems. Whether or not Tana is infected, will become a monstrous being, or will be able to leave this place remains unknown.

Vampire books are getting cliché. How many more variations can there be? Black, however, brings back the old horror mingled with fascination. Throughout the book, Tana refers to vampires as monsters and inhuman. Black often hits on the idea of whether a vampire is a completely different species, a monstrous predator, or if they retain their humanity. There are always going to be those obsessed with the undead and this book also takes a look at the fascination and what it takes to actually become a member of this “elite” race. I appreciated Black’s ability to show the dark and hopeless side of vampire groupies. These are people who want to be immortal and think their lives will be transformed to something godlike by their new found power, but not all the vampire wannabes become vampires. At one point in the book, Black is able to turn the tables and show just how sad and hopeless a lot of these wannabes are. Black both illuminates the glamorous side of vampire life, while also showing how hopeless and disturbing the fascination with this lifestyle can be.

Chapters jumped from Tana’s journey to either her past, her sister’s perspective, or someone else’s point of view. The audience is always kept on edge waiting to read about how the cliff hanger from the previous chapter continues, but also intrigued by the new perspective. This is a very engaging read and I flew through it. Turns out the cover art did not lead me astray.