On a homestead in Vermont, the land is barren, and when its plowed and dug up, strange artifacts are discovered. Looming over Sara Harrison Shea and her husband’s house is a rock formation called the devil’s hand. This is a place of mystery and superstition where odd things happen and locals are told to stay away. But it is Sara’s home and where she raises her daughter, Gertie. But one day Gertie is found dead, and not long after, Sara herself is found dead in the field behind the house. Her hysterical husband shoots himself after claiming that Gertie killed her. In present day Vermont, Ruthie and Fawn live with their mother in the same house. They have always been told about the monsters living in the woods and have taken the information to heart, but when Ruthie’s mother goes missing, they discover Sara’s tragic past in her diary pages and the fact that it may have a link to their mother. 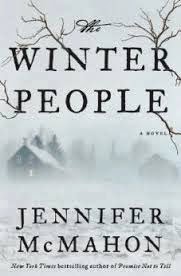 The novel, The Winter People by Jennifer McMahon, is fraught with simmering dread. McMahon creates a world of the paranormal alongside human suffering. How far would you go to bring a loved one back from the dead? Would it be worth the consequences?

This is a creepy novel that keeps you engaged. The book goes mostly between Sara and Ruthie’s perspectives, but there are other chapters from different character’s viewpoint. Although I’m often wary of multi-perspective novels, McMahon created a novel that flowed together, filling in gaps with other characters’ testimony. It also kept the book suspenseful with cliff hangers at the end of one character’s chapter and then jumped to a different character.

The novel presented a frightening, yet alluring idea. Sara finds a way to bring Gertie, her daughter, back from the dead, but she’s not the same little girl she once was. Gertie is creepy. She becomes the frightening thing that lurks behind you, but she brings a grieving mother the comfort she desires. Years later, it’s the ability to bring people back from the dead that drives more than one person to seek the Harrison household and the missing pages of Sara’s diary. Ruthie and Fern, her sister, get embroiled in the search and the consequences of seeking the forbidden. The girls find that what is assumed to be local legend and folklore is something much more sinister.

The novel was compelling and kept my attention. The ending was a little strange and didn’t exactly fulfill my expectations. Sometimes, however, not knowing exactly what happened is the scariest part. This novel suffered a little at the end from some reveals that just seemed smashed together. Overall, it was very enjoyable and a fun novel to make you shiver. Also it has my favorite cover of the year thus far!
If you enjoy this book and are looking for others like it, try Pet Sematary by Stephen King and This House is Haunted by John Boyne.